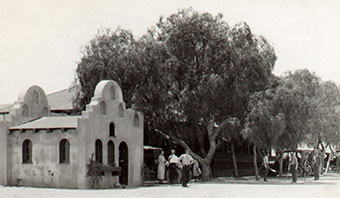 Mercey Hot Springs is located in the northwest corner of Fresno County approximately 13 miles west of I-5 on Little Panoche Rd. (A.k.a. J1). Little Panoche Rd. was originally a stage coach route used by many of the early California pioneers in particular those people that were doing business with the nearby, New Idria (Quicksilver) mine. The Hot Springs was known about by native Indians and was shown to a man “John N. Merci” who acquired the land for the purpose of raising sheep. Merci, who had his name changed to “Mercy” to be more Americanized, sold the property in 1912 to Frederick Bourn, a San Francisco based real estate developer who is responsible for the construction of many of the building still existing today and now being renovated by the current owners. The buildings constructed included a hotel, an annex to the hotel and seven cabins – The hotel burned down sometime in the mid 1930’s at which time a building (known as the bath house) was built and the soaking tubs (used in the annex) were moved into the bath house. Later still, the south end of the hotel was modified to have a complete restaurant and a swimming pool was installed as well as an RV Park.

Wanting to capitalize on the medicinal qualities of the water, Bourn changed the spelling of the name to Mercey so that it could be copyrighted in order to be able to bottle the water and sell it through the Owl & Liggett pharmacies. Renovations are nearly complete for the building then used as a bottling plant, (and known as “The Springhouse”) but is now referred to as “The Chapel” since that is what it resembles.